The Story Behind the Robert Sturman Seva Legging

The Story Behind the Robert Sturman Seva Legging

The Robert Sturman Seva Legging: Cover the World with Compassion 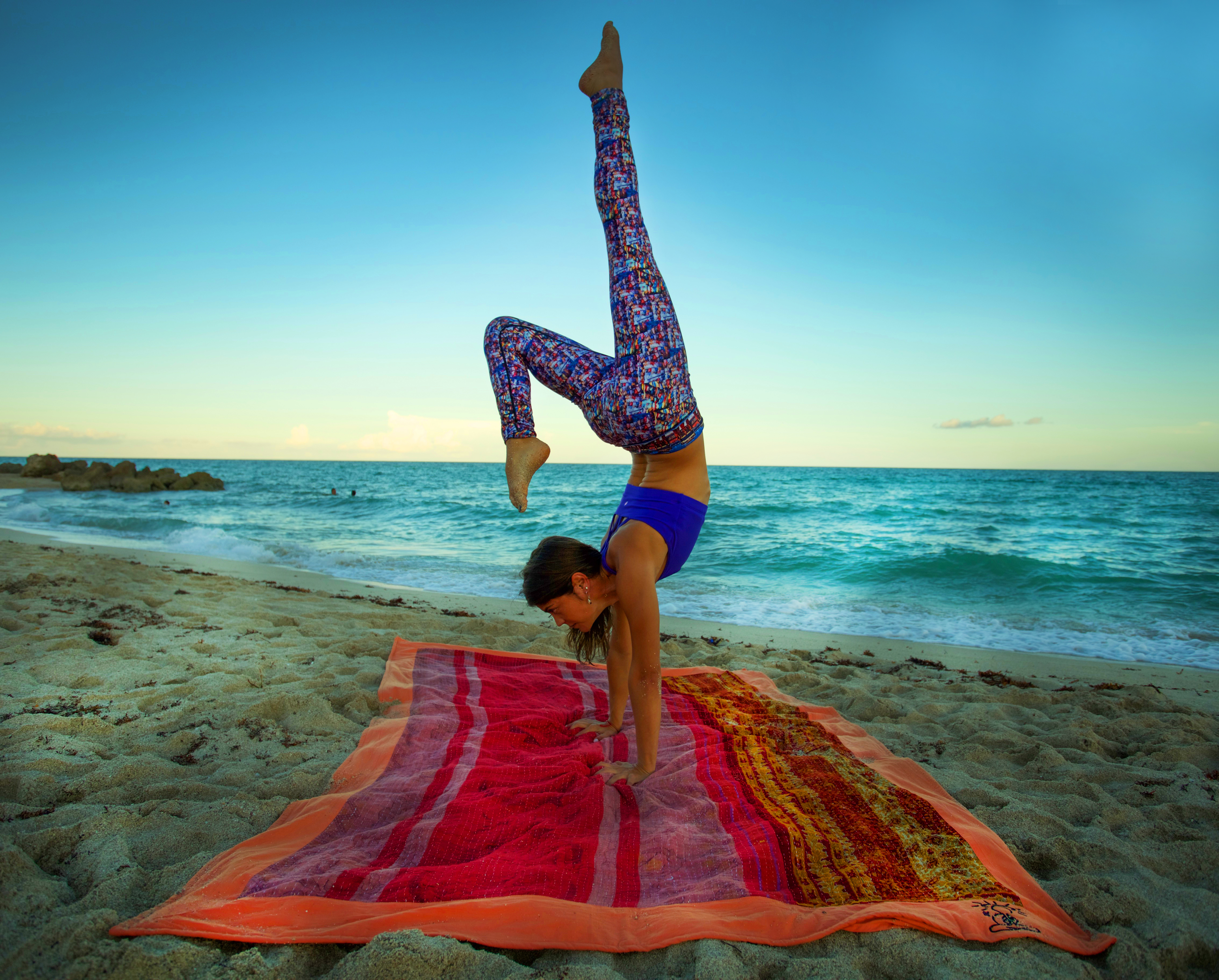 We are thrilled to announce that we have partnered with the celebrated photographer Robert Sturman and the Hanuman team to create something extraordinary â the Robert Sturman Seva Legging. Using two of Robert Sturmanâs remarkable photographs from Nepal, we developed an exclusive print for our best-selling Grace Yoga Tight. A colorful collage of prayer flags make up the body of the silhouette and a repeating print of Tibetan monks perfectly encircles the waistband. We made this legging in an amazing new poly/spandex fabric blend. Lightweight, luxurious, moisture-wicking and featuring 4-way stretch, we are in love with the ultra-soft feel of this fabric.

AND it gets even better! We are donating 100% of the net profits of this fabulous legging to the Hanuman Festival Seva Fund. Thatâs right, 100%. Hanumanâs dedication to seva aligns with our own convictions, and we are eager to support the charitable work they are doing in the world. This year they are focusing their seva outreach on children in need. Shop the Robert Sturman Seva Legging here: http://www.kiragrace.com/grace-yoga-tight-robert-sturman-seva-print/

A greater look into the story behind the images, as told by Robert Sturman: 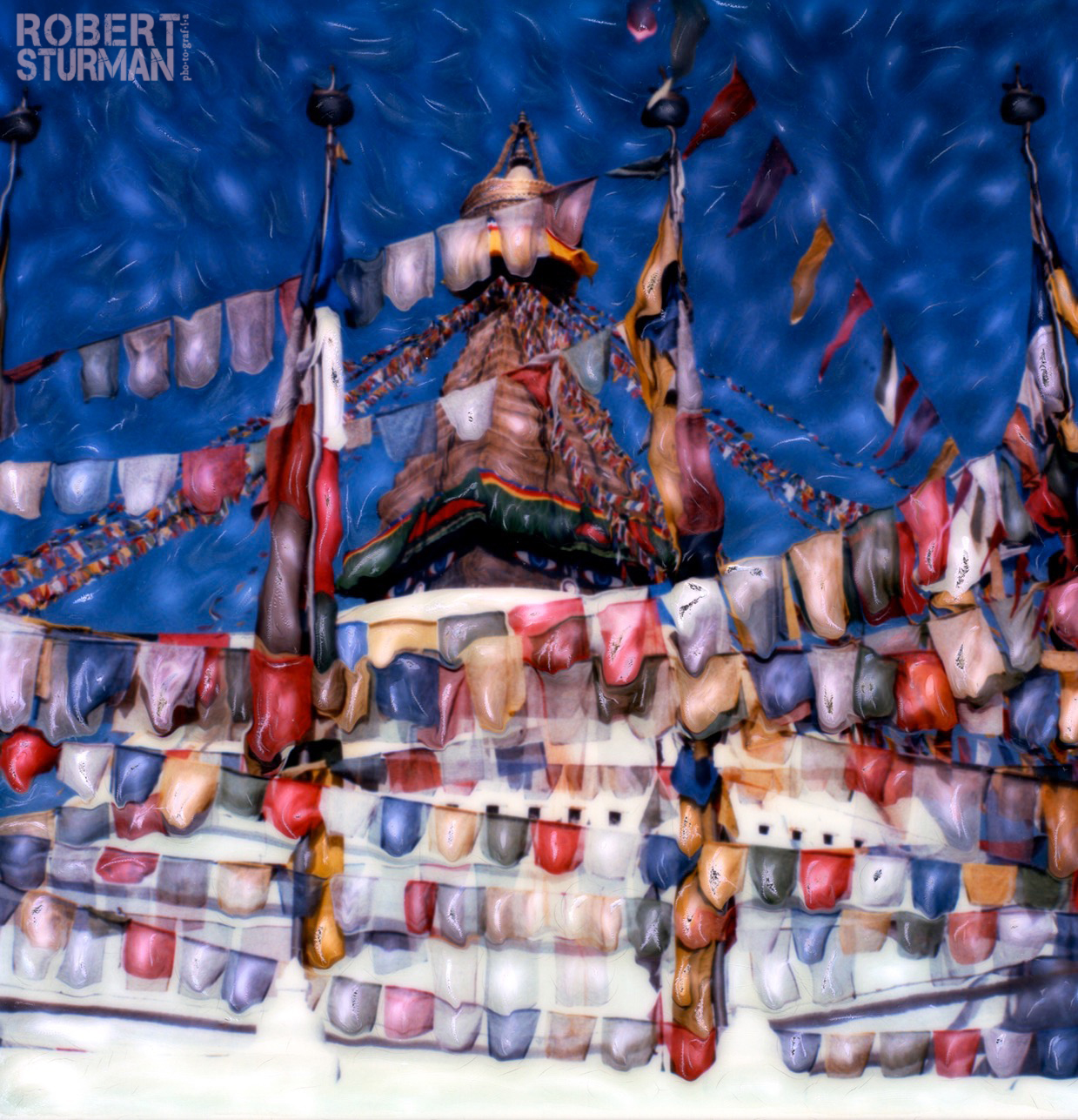 The two images used for the Prayer Flag Seva Legging were created in Kathmandu, Nepal in 2000. At that time, I used a Polaroid process of photography, in which I traveled around the world, celebrating the glorious diversity of our world. It was a process of photography in which I would create an instant Polaroid picture, then warm it in the sun and use various tools to carve into the surface of the image and accentuate the lines and the forms while the pigment in the instant photo was still wet. This was before the invention of Photoshop and all images were created on the spot of where they were shot, by hand. No paint. No photoshop. Just the pigment in the film.

The image of Boudhanath Stupa: It was a great meditation in mindfulness and precision. At the stupa, you are only allowed to walk around it in a clockwise direction. And when I photograph and look for the precise composition, I often move back and forth. I must have walked around, stopped, walked too far, about 30 times before I knew I was in the place of perfection for my composition. When I was in Kathmandu, I felt like I was at to top of the world. And I was. There is nothing like being in the heart of the Himalayas. It was, without question, one of the most enchanting places on this planet I have ever visited. The wind holds such deep mystery.

Below is an explanation of what the Prayer Flags represent:

Traditionally, prayer flags are used to promote peace, compassion, strength, and wisdom. The flags do not carry prayers to gods, which is a common misconception; rather, the Tibetans believe the prayers and mantras will beblown by the wind to spread the good will and compassion into all pervading space. 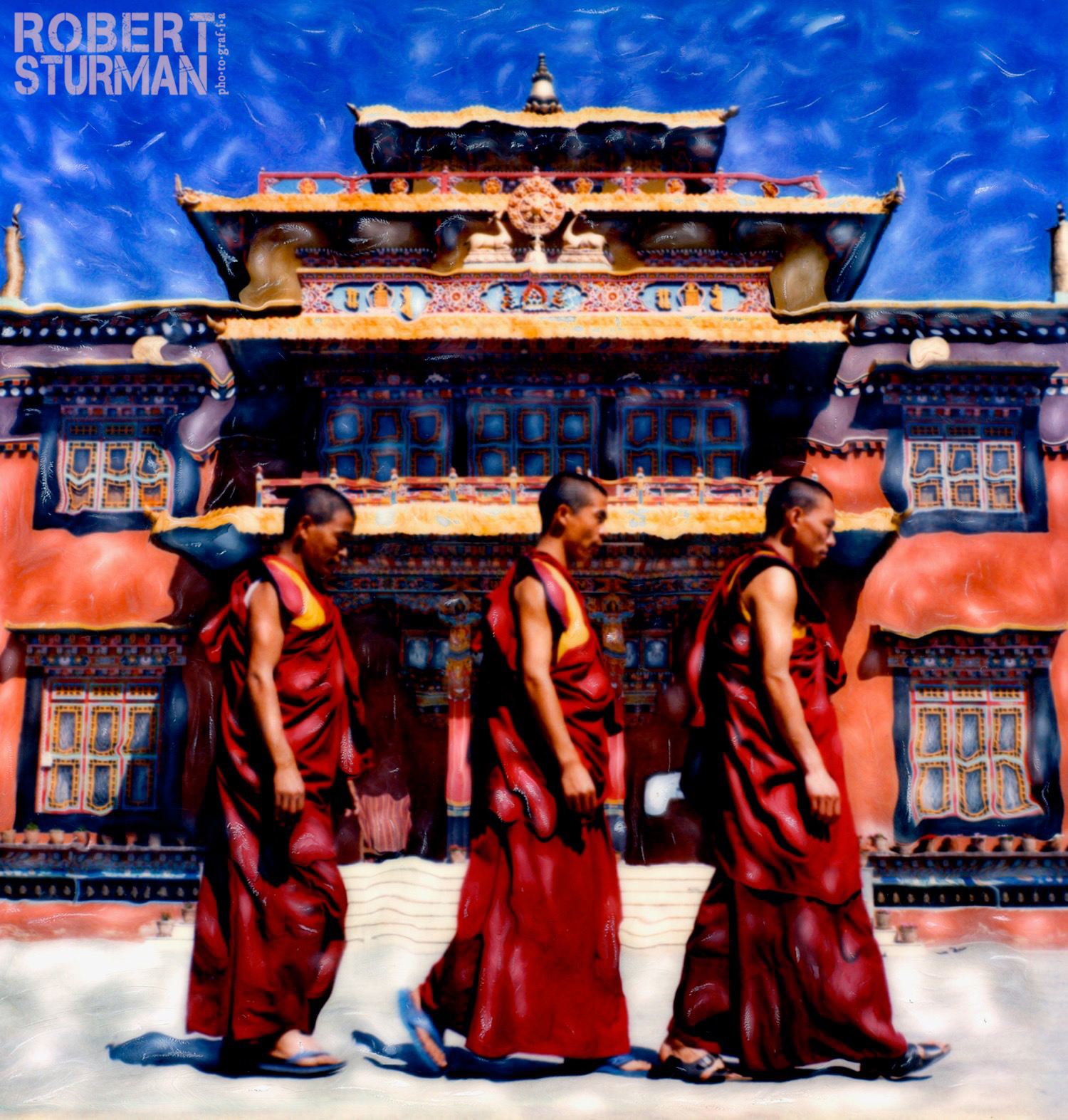 The Tibetan Monks walking: This image was such an important piece to me. I knew I could blow it if I was not centered and it was essential that I tapped into the yoga of photography. It was a Polaroid, so there was only one decisive shot that could be made. Unlike a regular camera in which one can click and click and pray for something balanced. Not this technique. A half a second too early or a half a second too late would have bought me a half a century of wishing I had not missed this image. And then there was the pressure of carving into the image and not making any mistakes. Once you carve too much and make a mistake, there was no going back. Remember, this was before photoshop and being able to take care of it later. Often, when an image turned into an unbalanced mess, I would just throw it away. I sat down in the monastery and I began carefully working on it. When I was finished, I knew I had succeeded. Everything flowed and it was perfect. I looked and looked for a long time - perhaps hours. When a piece like this comes out of my camera, there is a feeling of gratitude that is overwhelming. Sometimes a tear will well up and drip down my face. When that happens, I know that I have been in the heart of creation.